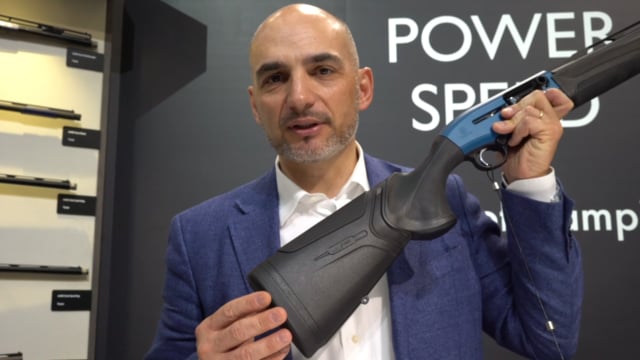 Roberto talks us through the new 1301 Cop Pro at IWA 2019 in Nuremberg. This latest offering from Beretta has a new shell latch designed to prevent double feeds but still using the jointed mechanism for easy loading and unloading, to unload one simply lifts the oversize lever up from underneath. The gun is the result of a collaboration with Toni System who have made a one piece magazine tube to Beretta’s specification as well as supplying the clamp, follower and spring for the new gun.

The port has a moderate ambidextrous cut, suitable for owners to customise according to loading technique. The stock has Beretta’s proprietary Kick-Off system to reduce recoil, in this gun it has been tuned to suit the typical 28g loads used in practical shooting making it subtly different from their hunting shotgun stocks where Kick-Off is set up for heavier loads.

The trigger group remains the same as previous models with the exception of the lifter which has been modified to make it sit in a lower position to facilitate loading, some competitors have been using a home made version of this modification and it’s great to see Beretta picking up on a market driven development.