I had the opportunity of catching up with Emma Ducker, a British competitor who has had an amazing journey in the sport of practical shooting in 2019, culminating in a double win in the British IPSC Championships – Enjoy and be inspired!

Stephen – Congratulations on becoming British Ladies Champion in Shotgun Open and Mini Rifle.
Emma – Thank you very much! I was delighted to pick up trophies this weekend for Open Ladies Shotgun Champion and Open Ladies Mini Rifle Champion. 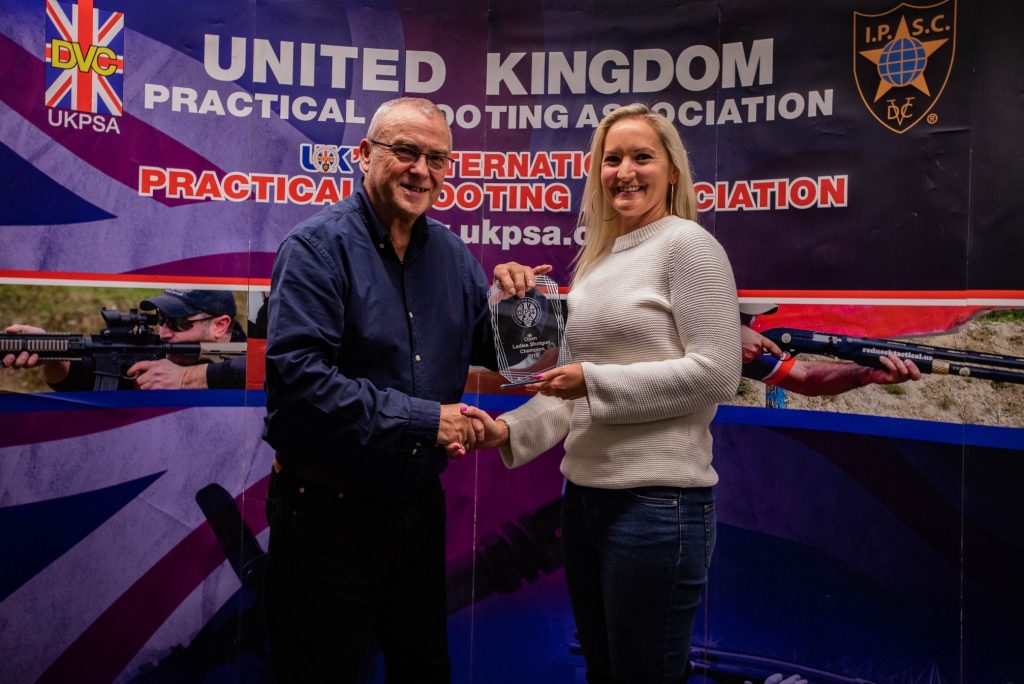 How did you get interested in competing and when did you start?
My husband Ben has been shooting for about 6 years and competed internationally for the last two or so. He used to bore me with the match videos every Sunday night! When he started out I had absolutely no interest, and whilst I supported him in what he was doing it never appealed to me. That changed when we went together to the IPSC Shotgun World Shoot in July 2018 in Chateauroux, France. Ben was part of the GB squad and it was the first time I’d actually been to watch him compete.Compared to watching Ben’s stage videos, I can say it’s a lot more exciting to watch in real life(!) I really enjoyed watching all the competitors from across the world, and it kind of made me realise what a big sport this is. I was able to watch the British, American and Russian ladies teams and seeing how well they were doing, and how much fun it was, inspired me to want to try it.
After the Shotgun World Shoot I started attending matches in the UK as a spectator which was a great way to start meeting people, seeing what the sport was all about and Ben (and his friends!) encouraged me to start competing. So in August 2018 I completed the UKPSA long gun safety course with Dave Smith and Iain Corrigan which covered Shotgun and Mini Rifle, I was then granted my Firearms Certificate and started shooting practical matches shortly after.
How did your husband do in the British Championship?
He did very well! He won 3 of the 5 rounds, and came 2nd in the other two, and is the British Open Shotgun Champion for 2019 also earning a Grand Master grading. I know he’s quite pleased with himself about that, it’s an amazing achievement for him. 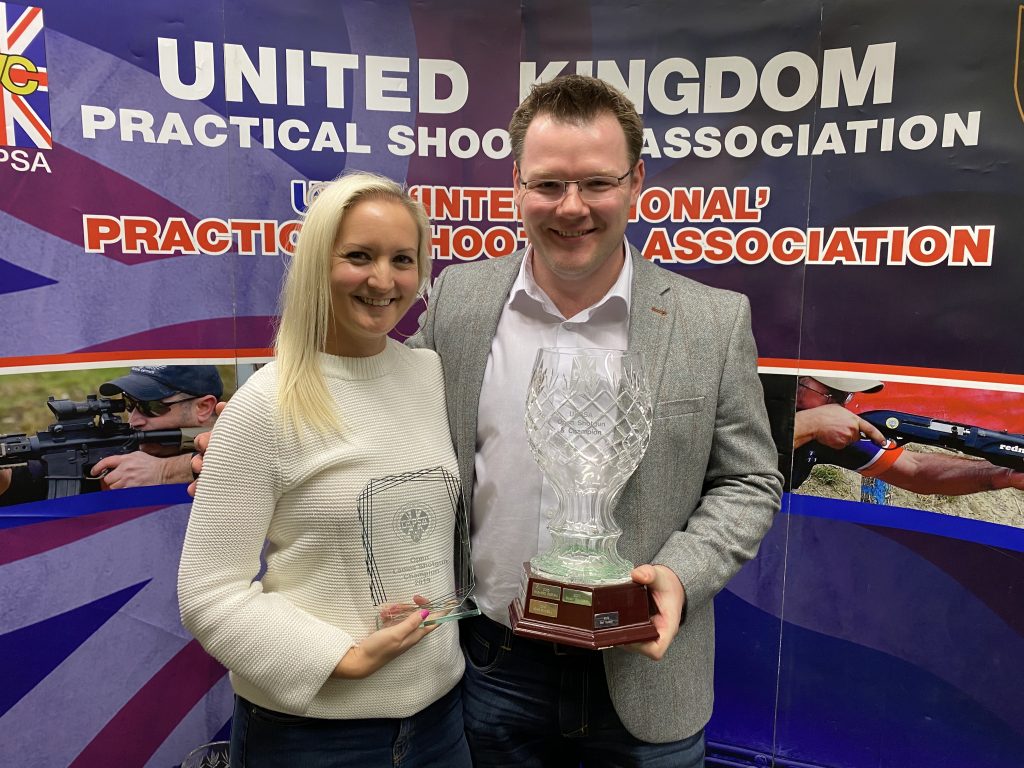 Tell us about your first match.
My first practical match was in Mini Rifle and was held at Shield Shooting Centre in September 2018. It was a great match to start with as it was a very relaxed atmosphere and we had a good squad of friends who all knew it was my first match and were all really encouraging and helpful with any questions I had. I did come last, but I was just really proud of myself for getting through my first match! Mini rifle was also a good discipline for me to start in as the gun and ammo are light and there’s not much reloading to do.

My first Practical Shotgun match was in March 2019, again at Shield Shooting Centre. I have some experience of shooting shotguns during our trips to the USA and found that I didn’t really get on with the standard division guns, so I went straight into shooting Open. The gun had different controls from the mini rifle but I found that a lot of the techniques were similar, so that helped me get my bearings. There were only two other open shooters at that match, so yes I finished last again but I had a great time and proved to myself that ‘yes, I can do this’.

Both of those first matches were club level, which I think was a great way to start out and build confidence before heading out to higher level competitions. I started shooting IPSC Level 3 matches in July 2019 and shot 3 of the 5 rounds of the UK Championship this year. 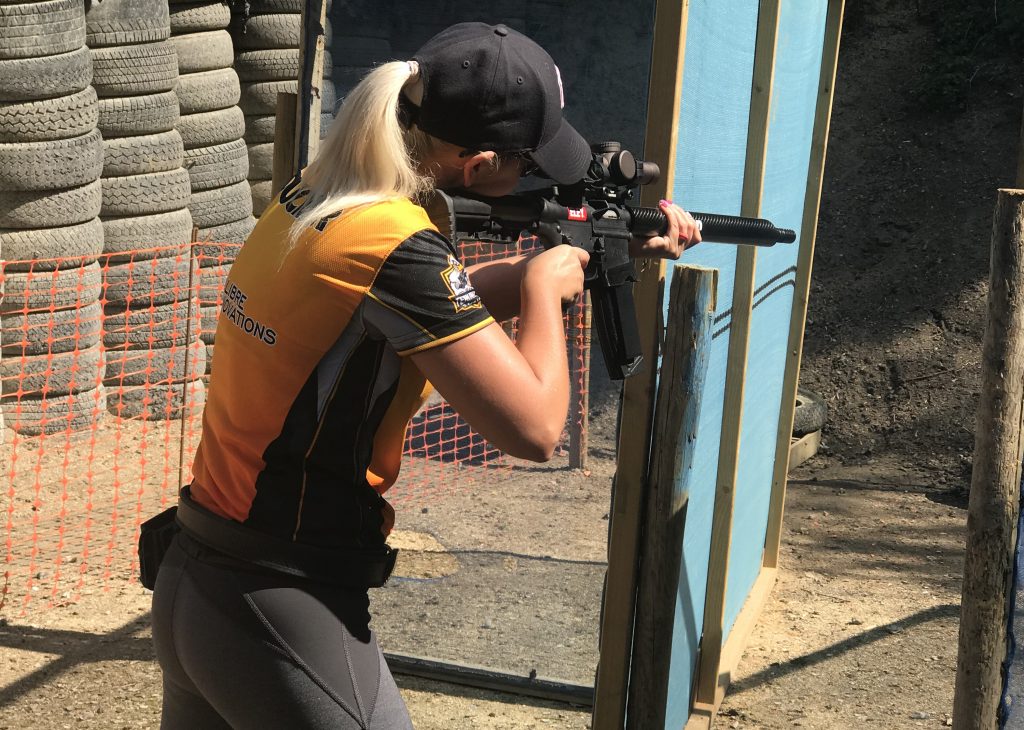 Where else have you competed this year?
Ben and I have had quite a year in 2019, we have travelled all over the UK (Scotland, Dartford, Wales, Silverstone, Worcester Norton and Grimsby to name a few) as well as abroad. Together we had 5 international shooting trips – seems like all our holidays are shooting related these days!

In October, I competed in my first 3-gun match at Blue Ridge Mountain 3 Gun, which was held at Rockcastle Shooting Centre in Kentucky. I was really fortunate again to have an amazing and supportive squad which included some of the top US women 3-Gun competitors: Becky Yackley, Lanny Barnes, Tiffany Venters. I learned a lot from these ladies and I’m so grateful for the support they showed me during the match – Becky really encouraged me to sign up, and at the time I didn’t feel anywhere near ready – but I’m so glad I did! It was a big focus for my training during the year to know I had this match coming up and I needed to get comfortable with all the procedures with each gun to feel ready to take it on!

I’ve also travelled to watch and support Ben and our friends whilst they competed in the Rock Hard 3 Gun in Kentucky, the Rifle World Shoot in Sweden, the French Rifle & Shotgun Nationals and Central European Shotgun Open in Hungary. I’ve definitely done more travelling this year than I’ve ever done before, and I’ve never had so many people ask me “why aren’t you shooting?”. Planning to change that in 2020 and get myself into some more of these matches. 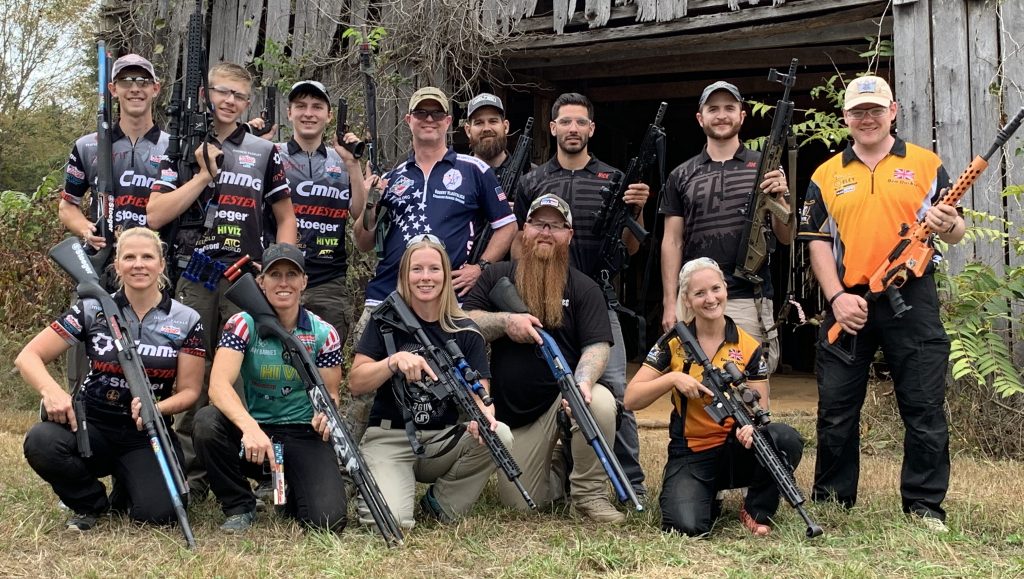 Describe your personal journey this year.
I’ve always been quite a shy person and I like to stay in my comfort zone, staying at home at the weekends or just going to the gym. Since I’ve started competing I’ve learned so many new things and it’s given me a hobby to focus on and want to work hard and improve on. I’ve had to push myself into situations way outside of my comfort zone that I never thought I’d find myself in or be able to handle. So in that way not only have I learned a new skill, I’ve also grown a lot personally – and met a bunch of new friends too!
When I first started out I wasn’t concerned about my result, so long as I was safe and had a good time. But as soon as the results came online I was reviewing my placings and wishing I had done better. I’ve never been a very competitive person until now, but that’s definitely changing! 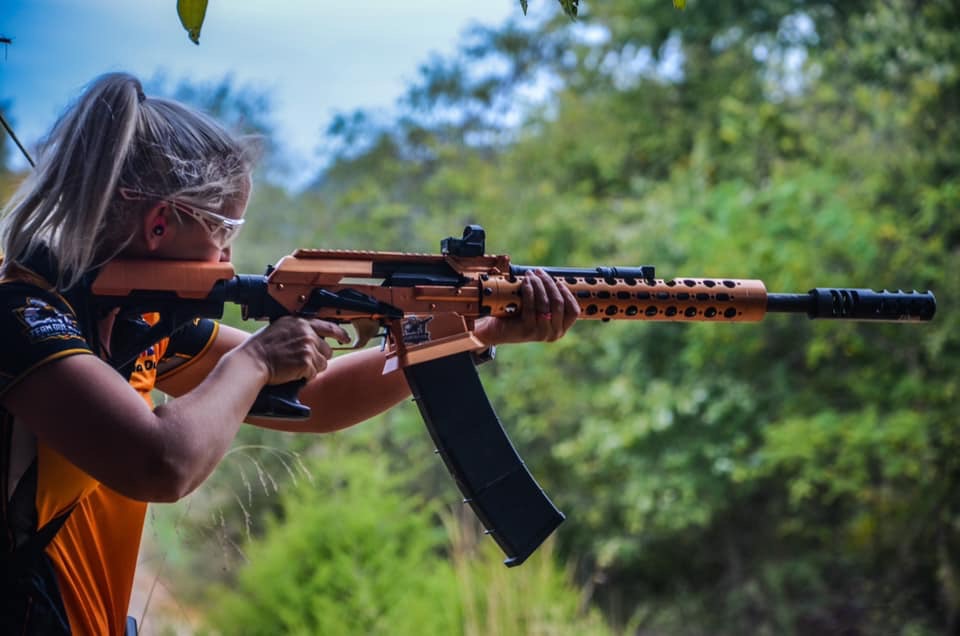 What challenges have you faced on this journey?
I’ve faced a couple of challenges on my journey so far. Physically being able to hold the weight of the shotgun in particular, managing the recoil and moving around the stage. This was especially evident at Blue Ridge where I had to carry three guns, three sets of ammo and deal with obstacles – it was very physically demanding!I also suffered from a lack of confidence in my ability, especially just before matches and worrying if I would be any good. There are sometimes things which I think I know, but would worry me when I’m on the way to a match as I know I will be on the stage on my own and relying on myself. I would regularly sit in the car on the way to a match and almost talk myself out of competing!
How did you overcome those challenges?
On the physical side I’ve been working hard in the gym to increase my cardio fitness and overall strength, upper body in particular, making it easier to manage the gun and improving my speed and movement. I’ve also been receiving training and working on my technique to cope with the recoil – I think the shotgun helps a lot with that too. We have a Dissident Arms KL12 shotgun which has a really good muzzle brake, although it’s not that popular with the RO’s!Ben has been really supportive and has helped me out with drills, simple things like the range commands for loading and unloading and remembering all the controls on the guns. It sounds really simple now, but it was very good at building up my confidence when I was starting out. I now regularly carry out dry fire practice which gives me confidence in the controls and builds muscle memory. I try and prepare as much as possible before a match, making sure all the equipment is ready and if we can, looking at the stages beforehand to give me an idea what to expect, this all helps to reduce the numbers of things to worry about and I can then focus on the match itself when I get there.
How have you been received as the new kid on the block by experienced competitors?
I’ve had such a positive experience coming into the sport as a newbie! Everyone I’ve met has been really friendly, helpful and encouraging, always offering advice and tips. It’s definitely a benefit being friends with some of the UK’s top shooters, there’s so much to learn!I also received a huge amount of support at Blue Ridge, from everyone at the match and especially from my squad. I was lucky to be shooting with some amazing shooters and great friends. They helped me through some tough stages and were always behind me shouting encouragement! 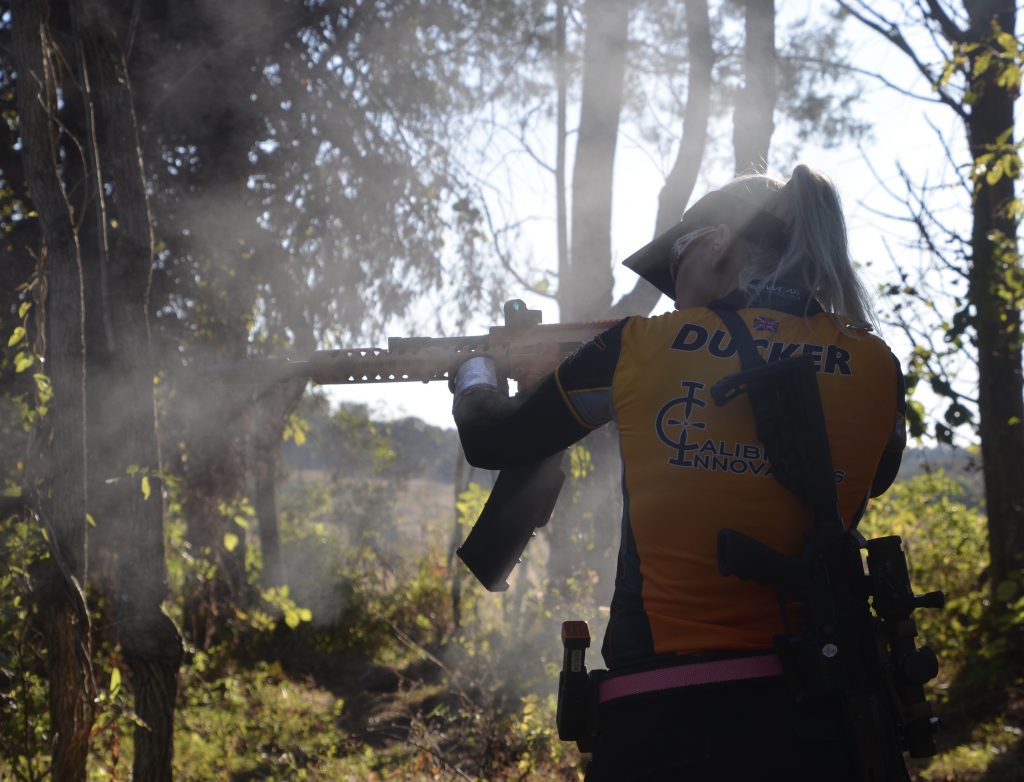 Do you have any advice for other ladies who are interested in starting out in the sport?
My advice would be to come along to a club day or guest day and try it out. These are a great way to try out different firearms in a relaxed and supportive environment to see what you enjoy. Everyone I’ve met is really helpful and encouraging of new shooters and it’s a great way to make new friends, try new things, keep fit and travel! I’ve really enjoyed getting into this now, it’s opened up opportunities I would not have had and I’ve made so many friends across the world who I would never have met without shooting. It’s great to go to matches, have a great squad and have fun!
What are your objectives and plans for the 2020 season?
My 2020 goals are to improve my match percentages and eventually my IPSC grading for both Shotgun and Mini Rifle. I also want to start to compete in IPSC competitions outside of GB and to compete in another 3 gun match in America.
Will we see you at Worldshoot in Thailand in 2021?
I definitely hope so! I’d love to see some more ladies moving to open division so we can put a team in!

Many thanks to Becky Yackley Photography for providing the images from Emma’s US trip.