Background to the gun weight discussion

Over the last few years we have seen an increasing number of manufacturers develop shotguns specifically aimed at practical shooting; Beretta, Benelli, Breda and others have introduced models optimised for IPSC competition. Beyond these new OEM offerings there is also a growing number of companies turning out tuned guns and/or selling parts aimed at practical shotgun competitors. The newest trend is weight reduction through the use of carbon fibre to replace magazine tubes, stocks and furniture. An early adopter of the minimum overall weight approach is competitor and parts manufacturer Pavel Orlov so we decided to interview Pavel about the thinking behind this development.

Anybody who has been involved in motorsport will know that weight saving is an important part of making a successful competition car or motorcycle. By reducing weight there are gains in both acceleration and braking, handling is improved and tyre wear is decreased. All these things make weight loss a win win in motorsport and the only downside is the cost of achieving the reduction while retaining structural integrity. When we transfer this to practical shooting we can consider that gun manipulation for transitions and reloading will benefit similarly but we must also consider that the weight of the gun has an effect on recoil and muzzle flip. We turned to Pavel Orlov for some answers:

Question 1 – What was your thought process when deciding to make a lighter gun?

Pavel – What does it mean for us, practical shooters you ask? Everyone knows that the recoil impulse depends on the mass of the gun, so the heavier our shotgun the less recoil we get, potentially giving the opportunity to shoot faster splits. The second part of our performance is connected with movements, transitions and loading, in other words, operating the gun. So, the conclusion is: if we figure out how to speed up one of the components without slowing down the other, we will improve our performance. That was how I reasoned when I started creating a new concept for my shotgun tuning.

Question 2 – Has a lighter gun affected your impression of recoil and more importantly has it increased your splits?

Pavel  – We can’t shoot faster than the technical limit of the gun — about 0.19 sec for semi-auto — and I shoot just at the edge of this limit, so if I make my gun heavier I gain nothing. But what if I lose weight from the gun? Gun operation will definitely be much faster, easier and more reliable because of the lower efforts to accelerating and braking when moving, transitioning and loading….but would I have my split time increased? It’s a good question! Only some experimental work gives me the answer. Amazingly no inconvenience was found when shooting with splits around 0.18 and even less, so the lighter gun didn’t make my splits any longer.

Question 3 – Did you notice any benefits when testing the lighter gun?

Pavel –  It became absolutely another gun in operation. Every loading, every transition, every moving with the gun became faster and easier. My teammates took my gun on training sessions, and ‘WOW’ was what I heard! That was the beginning of the serial production…I am absolutely sure that this trend is part of the future of practical shotgun development, being proved by many companies that have emerged in recent months moving in the same direction with carbon parts.

Question 4 – What weight reduction have you achieved?

Pavel Orlov – I started with losing 120g on my mag tube, having produced the first telescopic carbon version. Given that this weight is located at the end of the gun, I’ve got not only weight reduction but also a way easier gun to manoeuvre while keeping compact size and large loading capacity through the telescopic action. Сontinuing to work in this direction soon I produced a carbon stock (-170g from the original one), followed by the carbon forend (-60g from the original part). Total weight loss achieved amounted to 350g, a bit more than 10% of the gun’s initial weight.

What’s in this for the competitor?

Thanks to Pavel for answering our questions, it is clear that he has seen improved performance from reducing the weight of his gun but will everyone? There is no simple answer to this, some people are more sensitive to recoil that others, some have better technique, stance and gun fit are also factors. The only way to really know how this will affect your performance is to try it for yourself and this isn’t a cheap experiment, however those chasing the last few % of performance will no doubt be looking seriously at the idea.

Weight saving, like many modifications, is not contentious in Modified and Open but in Standard and Standard Manual we need to read Appendix D carefully.

Section 5 says Standard and Standard Manual guns must be a “Complete shotgun produced by a factory (minimum 500 units) and available to the public.” So when is a shotgun not complete? Adding a magazine tube which is not sold by the manufacturer has become commonplace, removing material from the receiver for faster loading is also a widespread and accepted practice in the Standard Divisions, so what is “Complete”?

The Glossary at 12.5 does not define “Complete” so perhaps we have to be guided by what’s already gone unchallenged – for example there are numerous Beretta 1301s being used with 1301 Comp Pro stocks – suggesting that replacing the supplied stock is acceptable.

The next rule update from IPSC will be in January 2022, assuming the 2021 General Assembly goes ahead despite Covid, so we need to look out for updates.

Where this becomes even more interesting is that prior to 2015 the rules had 4 Appendices (D1 -4), one for each Division and these contained additional information.

In 2015 the format changed and all Divisions were fitted into a single Appendix D, at this time the information which clarified the position around stocks in Standard and Standard Manual was dropped from the rules. Here is the earlier text, we have included the 2012 and 2019 Appendices below for you to see the changes.

23. Modifications which are specifically allowed:

– Feed ramps as replacements of the carrier release button (Remington 1100 and 1187).

– Checkering of frames, stocks and fore-ends.

– Cosmetic enhancements that do not give a competitive advantage such as custom grips, plating, etc. 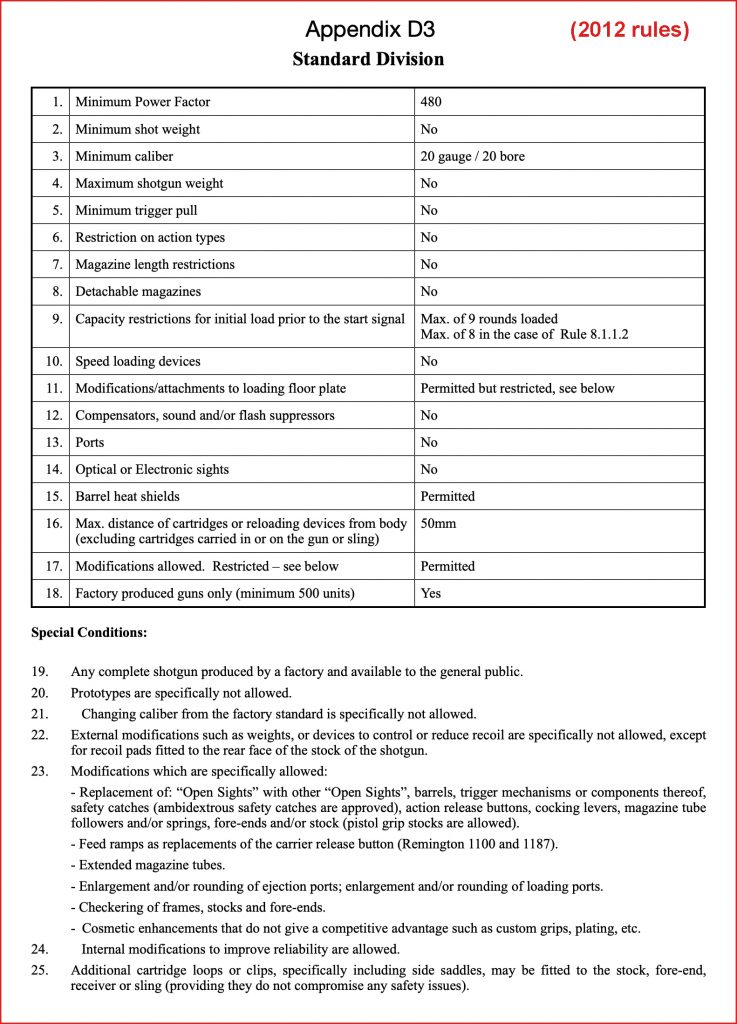 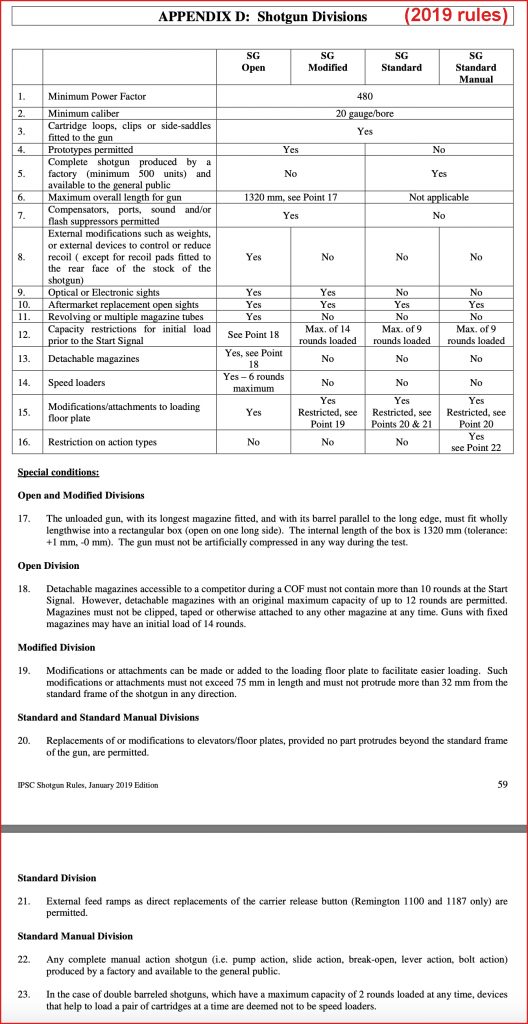