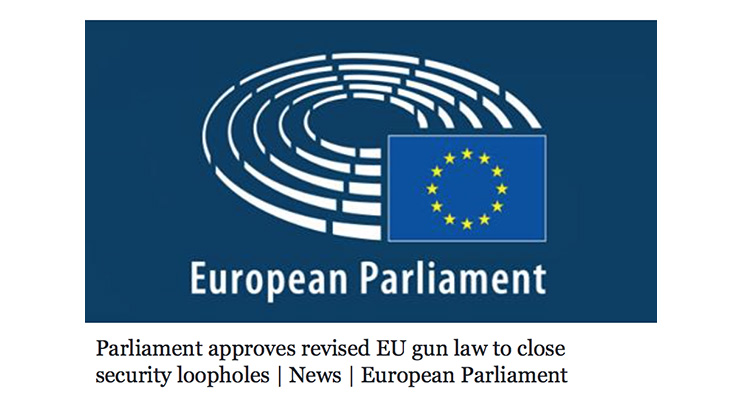 The European Parliament approved revised EU gun law to close security loopholes but what effect will this have on sports shooters when they travel around Europe?

“Tighter controls on blank-firing and inadequately deactivated weapons, like those used in the Paris terror attacks, and an obligation for EU member states to have an appropriate monitoring system in place for the issuance or renewal of licences and to exchange information, are among the updates approved by MEPs to the 1991 firearms directive on Tuesday.

The provisional deal on the EU firearms directive reached by Parliament and Council negotiators last December was endorsed by the full House by 491 votes to 178, with 28 abstentions.”

Where does this leave sports shooters?

Only time will tell but regular travellers to European IPSC matches are already expressing concern about the practicalities of arriving at an airport with what will now become Category A firearms.

The EU’s press release says that “Member states will be able to grant Category A authorisations to certain types of individuals, e.g. target shooters” but the reality of what comes from will be able to rather than must could be a very complex proposition for travelling competitors as the interpretation and implementation in various countries around Europe is decided.

Since most shotguns in Standard and all in Modified have magazine tubes that exceed 10 rounds in capacity this is a real concern for shotgun competitors. Exemptions for “high capacity” magazine use are up to Member State governments to decide, that’s one of the biggest issues with the outcome. As this will probably lead to less harmonization than what we currently have.

What is the timescale for the changes?

No exact enactment date was given, apparently the next steps are:

“The draft law still needs to be formally approved by the other co-legislator, the EU Council of Ministers.

Member states will have 15 months from the date of entry into force of the directive to transpose the new rules into national law and 30 months to put in place data-filling systems for registering all information needed in order to trace and identify firearms.”

So it would seem to be a pretty fast track from here on, assuming the EU Council of Ministers approve the new measures.