When it comes time to buy ammunition for a 3-Gun or Practical Shotgun match, the process can be a little bit confusing. Spending time around a lot of 3-Gunners, it’s clear that even experienced action shooters sometimes don’t understand what all that stuff on the box means.

First, the basic types of shotgun shells: Birdshot, Buckshot and Slugs. In Practical Shotgun matches, you’ll primarily be using birdshot. Most US 3-Gun/PSG matches require a few slugs in different formats, while buckshot is infrequently required in the US (but generally accounts for 1-2 courses in the average overseas IPSC match).

Legality: While in the US there isn’t a single unified rulebook for 3-Gun/PSG matches, the general requirements are all pretty much the same:

What makes a reliable shell?

Base: The metal base makes the rim that the extractor grips. On cheap shells, the base is poorly bonded to the plastic hull and will often be pulled off and extracted from the firearm, leaving the hull stuck in the chamber. Poor bases will also expand and stick in the chamber, causing extraction problems even in manual shotguns.

Hull: Flimsy plastic hulls deform easily from impact or even from heat. This can cause significant feeding problems. Stiff hulls found in match-grade target shells are far less susceptible to deformation. Magazine-fed shotguns are particularly sensitive to hull deformation as the shell has a much less direct path into the chamber.

Crimp: The crimp holds the shot into the shell itself, and forms the end of the shell. A poor crimp can cause a hangup on the edge of the chamber during feeding. This problem is present in all shotguns but is magnified in magazine-fed shotguns which are hypersensitive to any feeding imperfections.

Properly Powered: Whether they be inertia-driven or gas-operated, all semi-auto shotguns need some sort of power to cycle. The power of the shell determines the speed of the bolt cycling, so excessively-powered shells can also cause malfunctions and accelerate wear on parts.

On any given box of shells, you’ll find all the information you’ll need to figure out if they’ll cycle your shotgun.

Length: 12 Gauge shells are available in various lengths to fit more powder and/or shot. For practical shotgun purposes, 99.9% of the time a 2 ¾” shell is desired.

Shot Size: This is the size of an individual pellet – which will determine how much energy is delivered on target by a single pellet, but has nothing the function of the shotgun*. The smaller the shot, the wider and denser the pattern of the shotgun becomes, at the cost of energy on target. Target shells are typically available in #7 ½, #8 and #9 shot.

Shot Weight: In the US, target shells are typically 7/8oz, 1oz, or 1 1/8oz. More weight means more pellets of shot, which means a wider pattern. Shot weight, combined with velocity, will determine the function of your shotgun.

Velocity: Bear in mind, this is only the manufacturer’s stated velocity, but it will give you an idea of whether the firearm will cycle with the ammo or not. IPSC measures with a chronograph, so if power factor is a concern then select a factory load that should give you a comfortable margin and if possible test over a chronograph.

Dram Equivalent: This is a holdover from the turn-of-the-century transition from black to smokeless powder. Commercial ammunition was labeled by powder charge in drams. When smokeless shells came around, manufacturers stated that the new ammunition was equivalent to the old dram system. The lowest-recoiling shotgun load that will reliably cycle a semi-auto would be “2 ¾ Dram”.

Regardless of manufacturer, most of them all offer some version of the same type of load. Here’s what it means when you see “handicap” or “light target” on the box:

I believe there are four tiers of birdshot.

Budget birdshot is the cheapest that’s commonly available. This ammunition is generally still reliable in tube-fed shotguns but you will see more bad rounds slip through as the manufacturer QC isn’t as tight. These shells don’t pattern very uniformly, but are still a reliable option for practice.

All budget birdshot is not created equal, however. Junk birdshot costs the same as good budget birdshot, but is made poorly. Inconsistent powder charges, bad crimps, flimsy hulls and poor bases are the main problems with junk birdshot.

In the US, Estate and the Federal Bulk Packs (available at Walmart) are good, reliable budget birdshot. Avoid ANY Winchester shell that isn’t a AA, as it’s likely junk (Universal is the worst shotgun shell available and Super Target/Win3Gun aren’t much better).

Mid-Tier birdshot offerings generally consist of a good wad and high-quality lead shot in an OK hull. These shells pattern well and are very reliable in a tube-fed shotgun, but a stiffer hull is usually desired for use in box-fed shotguns. Additionally, most of these shells are made with a steel base (sometimes plated with a different material), meaning they stick well to magnetic shell caddies (or hull pickers, for easy range cleanup).

Match-grade birdshot is the best ammunition available. Stiff hulls, good crimps, quality shot and wads as well as tight QC means this has the best chance of running reliably and patterning uniformly. Examples include Winchester AA, Remington STS and Federal Gold Medal Grand. Of note, most of these shells have an all-brass base, so they won’t stick to a magnet. Gold Medal Grand is the only match shell I’m aware of with any steel in the base, so it’s the author’s choice of match shell for his King Competition caddies.

Here is a link to chrono data for birdshot ammunition tested by Brian – CHRONO.pdf 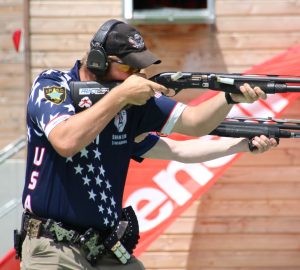 This post was brought to you by Brian Nelson who joined us as a guest author and forum moderator in 2019. Brian met members of the practical-shotgun.com team when he travelled to Europe for a series of matches in 2018 culminating with the IPSC Shotgun Worldshoot in Chateuroux. Brian told us that he was more of a 3-gun guy and IPSC Shotgun was sort of new to him, this later led to considerable laughter when he placed 4th in the world!

Brian is an instructor at Tactical Performance Centre in Utah, this work takes him around the globe. He is also the organiser of the Hard as Hell 3-gun match and along with his Dad he helps to run PractiScore. His interests include shooting, building guns and collecting guns, he has a great love of Sten guns and guns from the former Warsaw Pact countries.