There is a growing market in training-related services for shooting driven by the growth in the sport internationally, and many top shooters are turning their hand to providing training in one form or another in this market.

Pavel and Maksim are top-drawer shooters in IPSC standard shotgun: these guys know how to compete successfully at the highest levels and are very well respected in the international community. But does their ability to transmit information in the written form match their ability to perform in competition? This is an important question, since the book is aimed at shooters from the novice up. Structuring, and presenting concepts, routines, and approaches and putting them in a context so the student can understand why they are doing what they are doing is neither easy nor natural. Experienced shooters can ‘read between the lines’ but those at the start of their shooting journey are prone to misunderstanding if they are not given clear guidance: this is the challenge of good teaching. The teacher needs to be able to put themselves in the shoes of the student and understand what it is they don’t understand. This is much harder than it sounds.

This is a carefully thought-out, and well-structured guide and I applaud Pavel and Maksim on their attention to detail in the thinking behind their approach.

It’s important to be clear about what this book is and what it sets out to achieve. The authors have spotted that there are lots of shooters who look for advice and guidance, but have no single source to get it from. Sure, there are lots of YouTube videos of “my best stage at this competition” and old-guys shooting 10 plates in 4.5 seconds as though they do that every time they pick up a shotgun. There are also the wanna-bes explaining in great detail how they quad load (usually incorrectly). None of this is really helpful (other than it seems better than nothing).

What Pavel and Maksim have done is produce a guide of two halves. The first half collates the basics of position, stance, movement and sets them in the context of the rules and the way courses are designed. This is done succinctly and with no fuss or nonsense. Its exactly the thing I would have wanted to read as a beginner, but instead spent 2 years working it out and picking up crumbs by watching shooters at L2 and L3 competitions.

The second half of the book is a series of carefully explained and described drills that the authors have designed to test and ‘burn-in’ the principles of stance, movement etc, that they outline in the first half.

The text is supported by clear photographs depicting critical behaviours (eg ‘stance’ ) that anyone can decode and follow. When necessary good quality line drawings illustrate course layout / drills. Again, these have been well-thought out and are used to very good effect.

I have described the book so far as though it is aimed at novices – but it really isn’t. One of its skilful attributes is that it speaks to everyone from novice to accomplished shooter although shooters who compete at the highest level will obviously get less from this guide.

There is much to like about this guide. The authors have not scrimped on production costs (something many self-publishing authors do to keep production costs down). It is a high quality hard-back with good quality paper and a convenient A5 size (which means it straddles the awkward space between being readable on the couch and practical at the range). Being a well-bound hard-back means it will survive being thrown in and out of range bags and the paper quality means you can write notes on the drill pages without your words smudging or bleeding. All good stuff. A criticism here is that whilst they have thought about putting in “notes” pages at the end, they have only put in two sides. But I really am quibbling here – you get a standing ovation from me for the production values.

I also have an observation – the authors have paid for colour photographs embedded in the text (an indication of their commitment to quality production values) but when they have photographs of a shooter in full view they do not maximise the benefit from the figure being in colour (a shooter in a high-contrast, mainly black and white outfit, on a black and white set). This observation is not a criticism – it is perfectly possible to see what the authors want to be seen – it just seems odd that they have gone through all the trouble of taking good quality photos and not squeezed every bit of juice out of the opportunity.

If you are starting out in IPSC shotgun and you have the ambition to compete at club, L3, or even L5 and need to get your head around the nuances of the sport (in other words – every novice to B-grade shooter) then this is for you. If you are a seasoned competitor and want some new drills that someone else has designed and thought through then this book can deliver.

I have only one minor quibble with the content  – and it is minor – and that is that the fist “half” of the book is much more “novice-orientated” and the second half (chapter 3 onwards) is more “experienced-shooter-orientated”. A gentler segue into the second half would have helped the shooters most in need of this kind of guidance. To be fare to the authors, they have deliberately (and for good reason) adopted an approach that means they have gone for a clear structure based around ‘skills- principles – drills’ (something that is “practically” focussed). Its hard to square that with something that is more “progression” focussed. The pros and cons are not worth arguing over, especially as they have done such an excellent job of giving solid practical guidance.

Two expert shooters have sat down and structured their thoughts so you don’t have to.

Every IPSC shooter who has ambition to compete should have this and read this.

You can order the book by contacting Pavel Orlov: 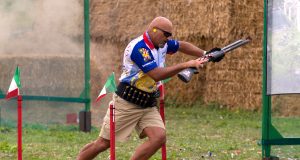